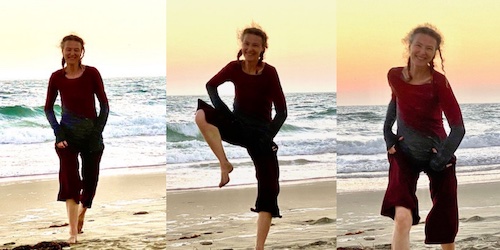 Regine was a free spirit with a passion for life and a love of the ocean. Her friend Kato Wittich contacted me and asked if Sacred Crossings could help carry out her wishes for a home funeral and full-body sea burial.

“I read Regine the option for sea burial from the list of ecological burials,” Kato told me,  “And her eyes lit up and began to sparkle with delight. There was nothing she loved more than plunging into a cold and lively ocean, except maybe dancing, oh and cooking and loving, and caring for her husband and her beautiful sons.”

I could feel Regine already. It’s amazing how deeply you can know someone simply by listening to what brings them joy. Regine’s life had been buoyant and joyful, so it was a pretty safe bet that her death would be the same.  The old saying, ‘How we do anything is how we do everything’ also applies to the dying process, and, I’ve noticed, extends until the body is buried or cremated.

Regine didn’t disappoint, her funeral and burial were joyful affairs.  I was going to write a blog post, but then Kato sent a testimonial which so eloquently captured the beauty and healing nature of the experience I decided to use it for the post instead.

Thank you Kato for sharing this tender story… 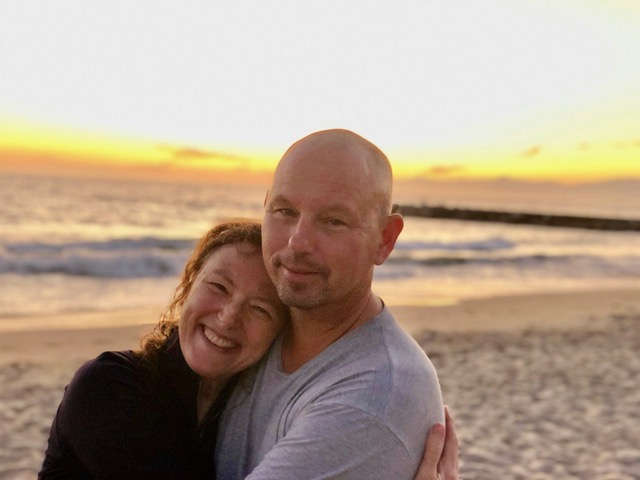 “When my sisterfriend Regine found out that her cancer had returned and was widespread, it was her strong desire to have her body sit for three days in her living room before having an ecological burial.

She was from Belgium, where old customs are still often followed, and when her father died, her family had kept him in the house for a several day vigil. So unlike most of us, she had had the powerful and beautiful experience of watching the body of a dead beloved change until it was clear there was no one in it any more, before saying goodbye to it. Regine wanted that journey for her husband and two boys and I was determined that if I could not help her live, I would help her die the way she wanted to. 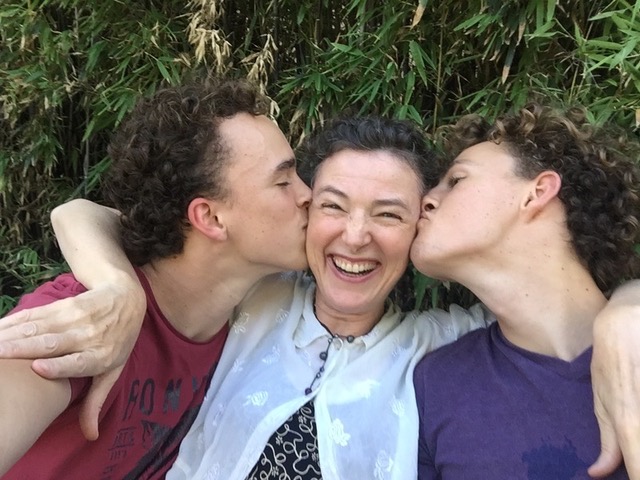 Regine with sons Elliot and Teodore

I knew that it was possible in California to keep a body on dry ice in the house, but I did not know how to go about it. Regine’s journey was very rapid, from suspicion of cancer recurrence to death was a little over three months, and we really did not know that death was close until a week before she died. When it started to be clear that there was little time left I began to ask around about death midwifes and funeral homes that did ecological burials. 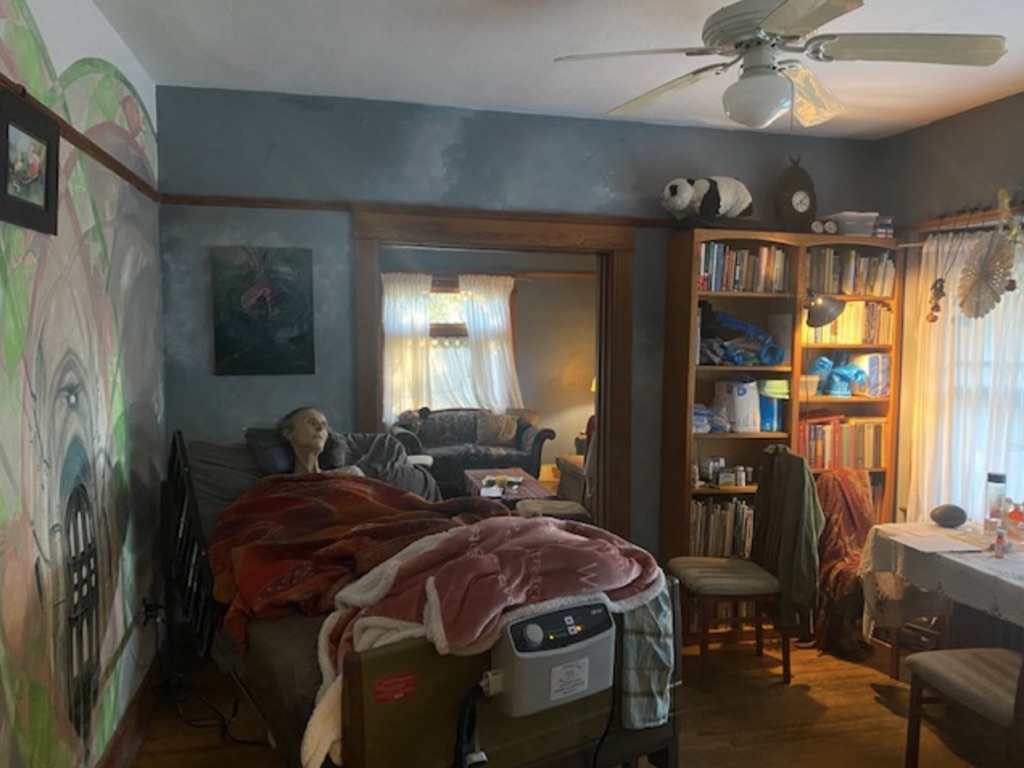 Regine on her deathbed

I have such immense gratitude that we found Sacred Crossings right away. I do not want to imagine what the journey would have been like without Olivia’s deep and caring support and the amazing team and services that she offers.

They organized a death midwife who supported us in preparing the body and brought dry ice daily for keeping Regine’s body at the right temperature. They offered lots of support for ritual and spiritual guidance, much of which we did not need, but it was wonderful to have the possibility. Regine lay in the living room, wrapped in a beautiful linen shroud, covered in flowers.

For three days, we held a vigil every afternoon for friends and family to come visit Regine and say their goodbyes.

On the first day, we all congregated around her body a great deal. We washed it, we touched it, we talked to her. Her husband and grown sons would come and go throughout the day, stopping to sit with her, to stroke her hair, to feel her presence and her absence as her body got colder. We opened the house for hours every afternoon for friends to come and visit, to weep, to touch her, to laugh and share stories. 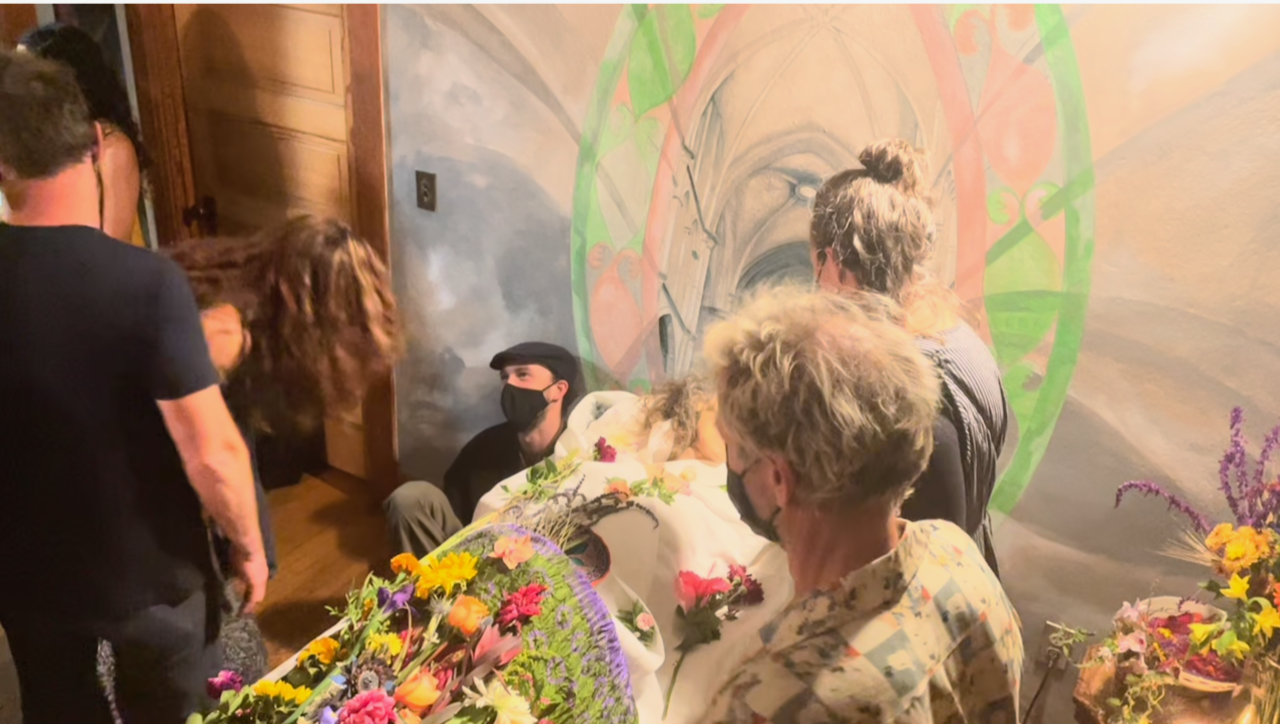 Friends gather for the vigil

The second day, she started to look less like Regine as her features settled. We still sat with her and touched her, but not as much. Friends and family came and went. She remained a presence, but no longer the center. There was more laughter about the strangeness of it all and less weeping.

Her sons began to turn toward their own lives, going surfing, cooking for us all, spending time together before they would return home. They would come and go, look at her, touch her feet through the shroud, but she no longer was a magnet. She also was not something to avoid. The reality was unavoidable.

Here she was in the living room dead, though inside each of us she was so alive. She no longer was in her body, now she existed in us.

The final celebration at the end of the vigil was beautiful, a room crowded with people who loved her, surrounding her body, celebrating her life. We were dancing with the Regine inside of us, witnessed perhaps by the body covered in flowers on her bier.

In the morning, we were able to carry her out of the house and into the waiting van with a readiness, instead of a holding on. It was hard to watch the van pull away, but oh so much easier than if we had not just had our fill of loving her body as it emptied out.

I have been a death companion in far too many deaths of beloveds, and every time there was something wrenching and agonizing in the departure, as their bodies were taken away long before we were ready to separate. Regine’s choice to be in the house, in the center of the house, as her body very subtly started to change, gave us the opportunity to heal in ways that do not happen when the process is too fast. While the permits were being filed and her customized weighted shroud was made, we began planning for the full body burial in the beloved sea that was her second home.

She loved life with such a passion, but she also saw dying as going into the light, and she was excited to find out what that would be like. She loved her body too, and did not want it buried or burned. That she could sink to the bottom of the ocean in her sailcloth shroud and become part of the vast expanse of the sea was for her an enormous joy, as it continues to be for all of us, who can visit her every time we go to the shore! 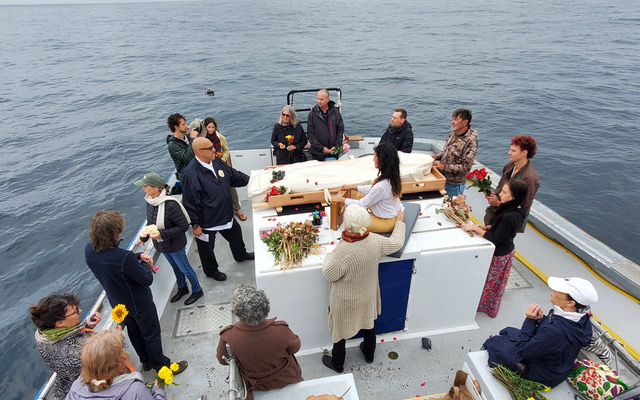 Family and friends tell stories before the burial

Sacred Crossings did the nearly impossible in this time of pandemic and constantly shifting obstacles. They found the right boat, the right captain, provided the expert who made the shroud and accompanied us to sea and participated in our simple ritual. We were lucky to have a marvelous singer, Odeya Nini, who sang for Regine while she was dying and again during the vigil and then sang her into the ocean.

Immediately after Regine plunged into the sea, one of her sons jumped in to swim with her, his warm body above as her cold one sank toward the bottom.  It was absolutely beautiful and exactly as Regine would have wanted it. The extraordinary thing was how ready we all were for Regine’s body to leave us.  Not that we were ready to lose her, but because of the home vigil and funeral, letting go of her body became easy. We had already journeyed with her until it was clear no part of her was still attached to her beautiful but empty shell. This process was so profound and so important for her family and friends, and it was Regine in her wisdom and her deep loving nature who provided it for us. 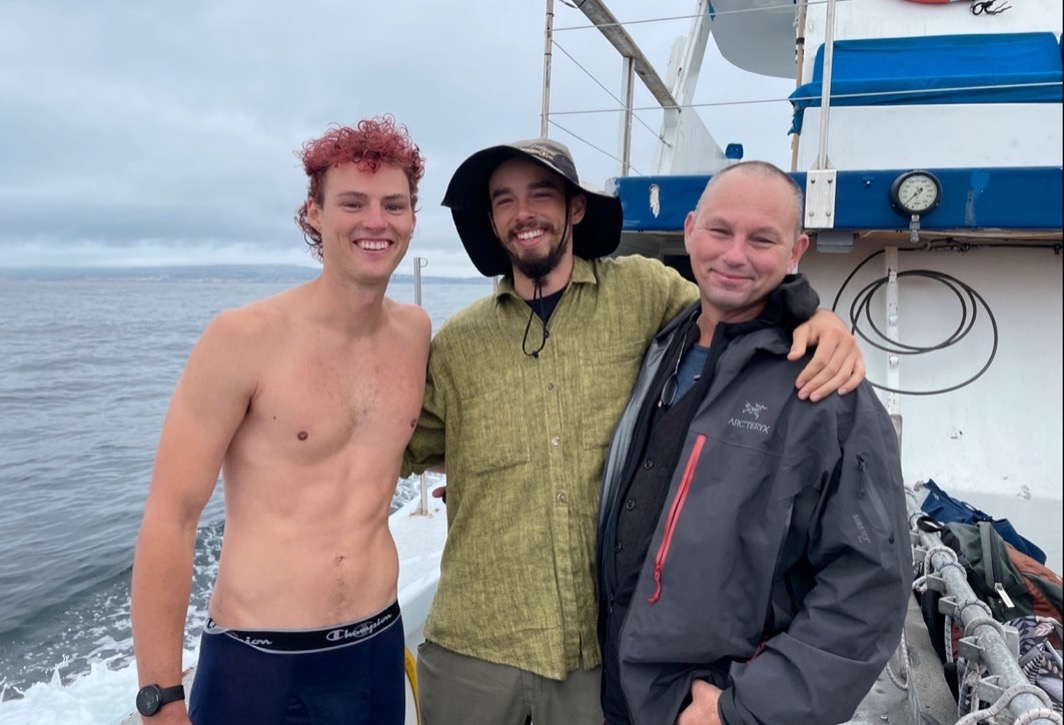 After the burial and Elliot’s dip, the return to port

The next evening we gathered for the final celebration that Regine had desired. As we danced on the beach at sunset for her, it seemed that Regine, a lifelong artist whose work was imbued with rich and joyful color, painted a 360 degree exquisite panorama for us, filling the sky around us with her love and her beauty as we danced a last goodbye to her.

In our death avoidant culture, we rarely plan for what is one of the most important journeys of our life, our death. It is as if we believe that as long as we don’t talk about it, it won’t happen. It will. For all of us.

Dying, even under the hardest of circumstances, is a profound and important part of living. Despite the pain, it can be joyful and beautiful for the one who is dying, and for everyone who loves them. So can the voyage of mourning and celebration that begins with death.

Words will never express the gratitude Regine’s family and friends hold toward Sacred Crossings and toward Olivia for giving Regine what she yearned for: an exit that was befitting the profound and joyful being that she was. I know now how I want my final journey to be, and I look forward some day to joining Regine in the vast and beautiful sea.” 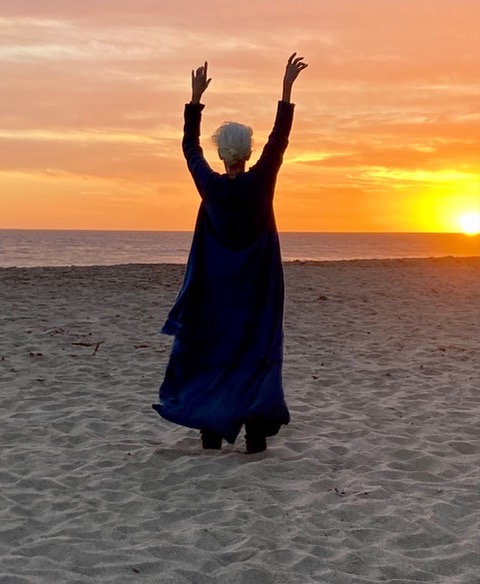